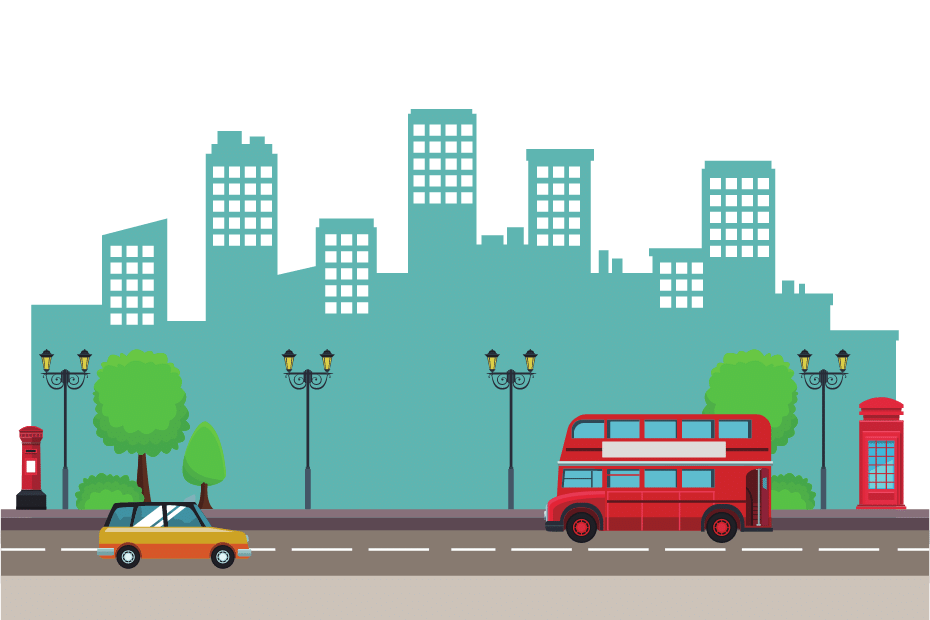 The article talks about the role and possibility of influence of integrated land use on transportation planning and vice-versa. It explores how appropriate interdependency and correct correlations between the two aspects of urbanization can be useful building blocks of attaining suitability.

It starts with understanding the variables of the built environment and their effects on travelling and mode choices. Various mathematical models have been devised with certain drawbacks. The paper talks about how they can be made more effective in predicting the travel aspects used in transportation planning. Applications of the theories shall be looked upon in the field of planning with suitable examples from India and abroad.

Finally, various relevant concepts related to Integrated Land Use and Transportation Planning (ILUTP) would be seen analysed using network analysis and centrality study and how various SGDs get positively affected by their virtue of it.

Importance of Integrated Land use and Transportation Planning

Urban India with a population of 377 million accounts for around 35% of its total population, living in 8000 towns or cities. This has direct implications for the increase in private vehicle ownership. Thus, rapid motorization appears to be a major urban concern. The air quality index in major cities like Mumbai, Delhi, and Bangalore is low, owing to the pollution caused by vehicles. On average, 40% of the pollution is caused by vehicles.

It is from this tangent of urbanisation and sustainability that ILUTP becomes one of the most important aspects to be considered while planning and policymaking from any urban space.

For the purpose of studying ILUTP, papers related to built environment variables and how they affect travelling and mode choices, written by pioneers in the field like Robert Cervero, Prof. at the University of California, Berkley, were studied.

There are various aspects that work together to finally determine how travelling of people work in a city.

The built environment can be dissected into three major aspects of variables as mentioned below:

The Elasticities of the Built form Variables

Prof. Robert Cervero’s paper, Travel and the Built environment, 2010, where transportation data of 50 different cities of the USA was collected and studied to understand the relation between the 3Ds and the VMT (vehicle miles travelled), usage of transit and walkability aspect of the built environment. He eventually came up with elasticities, i.e., how percentage of one quantity result in percentage change in other due to their interdependency, which are explained below:

There are various aspects that work together to finally determine how people choose their modes of travelling in and around a city.

The socio-economic and cultural tangent is one such aspect, while the build environment/ urban development of the city is another. These two aspects are very specific characteristics, unique to a city or region, and have direct implications of travelling systems of a city.

Urban development here works by interconnections of compactness, mixture of L-U and walk-friendly environment near the origin and destination points.

Cost, socio-economic and cultural aspect work by interconnections of time, distance and attributes of the mode of travel.

These two broad aspects working simultaneously, finally contribute towards the decision of mode choice of the user.

Logit models are a statistical tool to determine the probability of a transit mode to get used by the users in a city. There are two types of such models used in transportation planning.

The components of utility expressions in most multinomial logit formulations of mode choice weigh generalized costs of getting between points A and B as well as trip-maker characteristics, but they don’t account for the influences of points A (origins) and points B (destinations) in explaining mode choice As a result, the potential effects of density, land use combinations, and urban architecture in and around travel origins and destinations are often overlooked.

From the equation, it can be inferred that the probability is expressed as a function of not only the socio-economic aspect but also the built environment.

There are numerous applications of integrated land use, comprising of built environment (density, diversity and design) and transportation planning, comprising of travelling and mode choices (VMT, NMT and transit) as stated below:

Read more: Impact of Urbanization on landuse change in the rural-urban fringe (Rurban)

Ahmedabad demonstrates a step-by-step adoption of TOD. In response to declining public transportation utilization, Ahmedabad built the “Janmarg” Bus Rapid Transit System. Due to the Janmarg’s operational success, policy directions utilizing the BRT to accomplish TOD have been implemented.

The Janmarg Story – Laying the groundwork for TOD

The idea was to limit stretch by fostering a compact city form with higher densities in regions where public transit was available. The city’s development plan for the city’s central business district stresses mixed-use, high-density construction, public transportation, a pedestrian circulation network based on a grid, and a market-driven approach to land use.

Ahmedabad’s central city area is characterized by business, mixed-use, and significant residential neighbourhoods on the outskirts. Several industrial-zoned parcels of land are located close to housing neighbourhoods inside the administrative limits of the city.

Traditional TOD rules are followed by the recommended recommendations. Furthermore, the municipal corporation’s housing strategy emphasises the integration of transportation and commercial activities along the BRTS lines.

The bay of San Francisco has developed as a polycentric settlement over the years because of its topographic conditions. The typical characteristic of each such centre has characteristics as shown below:

As a result, the ULBs had to invest millions of dollars in Transportation Planning and in transit & roads. A better solution would have been to implement a non-selective L-U policy.

Fusing multilevel residential towers with apartments, affordable by an average employee, instead of just maintain the existing sparse development. Applying appropriate L-U planning is an integral part of transportation planning and can save resources, time & money

Contra Costa County’s Richmond Transit Village is a 17-acre mixed-use development, transit-oriented infill project. The project, which will be located between the Bay Area Rapid Transit (BART) and Amtrak stations in Richmond, will provide high-density housing within walking distance of public transportation. The main goal of the project is to work ahead of time with the city, local businesses and people, developers, transit agencies, and government partners to plan for the station’s and the station area’s continued economic development, particularly along Macdonald Avenue.

The transit village project was made possible by BART and the Richmond Redevelopment Agency’s creative decision to repurpose the existing station site for future residential construction rather than surface parking.

To present, roughly 800-900 housing units have been allowed in the downtown area, the majority of which are on the undeveloped ground.

The design is expected to provide 1,240 extra transit trips per day and improve pedestrian and bicycle activity, however, increased traffic congestion at some junctions may necessitate mitigation.

The traffic impact study for the plan was done using the LOS (level of service) technique, with an emphasis on automotive traffic and vehicle delay, as well as the influence of the plan’s transit investments and bike/pedestrian features on decreasing motor trips.

Policies/Ordinances that Aided in the Success of the Project

The village has effectively repurposed underused property while also encouraging transit use and house ownership. Despite an increase in overall affordable housing production, Richmond wants to see more affordable apartments.

With its historical architectural style, notably the mediaeval style, Jakriborg is an expression of the ideas of Traditional Neighbourhood Development. This is a one-of-a-kind example of a new town designed purely for pedestrians, with parking for automobiles restricted to the town’s boundary. The layout includes a central pedestrian roadway, market square, and common green, which together form the town’s denser core. These exhibit strong interest in aesthetics and come close to meeting diversity.

It also adheres to the new urbanist notion that more distinctive design facilitates a stronger feeling of place and communal identity.

The effective integration of commercial areas in the development is notable. Local businesses as well as a grocery chain have set up shop on the first floors of two adjacent buildings.

In most aspects, the community has been successful from the perspective of New Urbanism. Jakriborg is also served by a commuter train line that runs between Malmö and Lund. More pedestrian and car links between the two sides are planned as Jakriborg grows, as its owners want.

The hope here is to reimagine cities not as distinct zones for living, working, or leisure, but as ‘mosaics of neighbourhoods’ where these uses can coexist in the most accessible and diverse way.

An example of Paris’ Street redesign for the hyper-local vision.

An example of Paris’ Street redesign for the hyper local vision:

1. A courtyard that has been turned into a weekend garden.

2. A pedestrianized street for children, at least during pick-up and drop-off times.

3. New opportunities for youngsters to learn about culture, the environment, crafts, and other topics.

4. Organic foods farmed locally and supplied to kids in cafeterias.

The Problem of Parking

When it comes to ILUTP, the issue of private motorisation becomes imperative and so does the problems associated with it, one them being parking.

Parking: a commodity or a right?

In India parking is seen as a right rather than an economic commodity. Management of road encroachment by illegal parking is poor and done well in only few parts of the city.

The by-laws drive projects to provide a minimum number of parking spaces. This in turn generates the need or scope of cars to fit in the limited area of the city. This cycle continues and the requirement for parking becomes vicious and endless. Instead, a more humane way of using roads must be applied with importance to activities like recreation and social spaces.

Therefore, instead of creating more and more Multi-Level Car Parking, Low Income Housing, Public open spaces or Social Amenities should be provided. Instead of by-laws stating to provide ‘minimum parking’, ‘maximum parking’ requirements should be recommended. By minimising parking, there is a greater opportunity of creating a people-oriented city with integrated humane aspects.

There are 7 parking zones and per hour parking rate and timings varies as per each zone for visitor parking.

Parking price ranges from €1.3/hour to €5.00/hour. The prices in city centre are kept very high, so as to avoid unnecessary parking on the streets. Parking may or may not be free on Sundays and public holidays depending on zones. This showcases a good example where parking is seen as an economic commodity.

Policymaking Towards Green Mobility in India

The basic aims of the NUTP are to use road space to move people rather than automobiles, to include urban transportation into urban planning, to encourage seamless, user-friendly, and dependable public transportation, and to promote walking and cycling as safe modes of urban transportation. Read more about the policy here.

Despite the fact that 17 smart cities have adopted components like as first- and last-mile connectivity and multimodal integration, several have yet to make significant progress in creating NMT networks. To make the policy more adaptable throughout India, adjustments to the DCRs, as well as the overall design and architectural level, must be made to account for floor area ratio suggestions in varied locations.

According to a survey, the most important NMT activities in the Smart Cities project in 20 cities were public bicycle sharing programs, electric bus and electric rickshaw fleets, IT-enabled fleet tracking for e-mobility options, and EV charging and parking places.

The NEMMP report offers detailed predictions and situational analysis, predicting India’s potential to become a global EV market leader by 2020; nevertheless, the estimates have fallen short, and India is not even among the top 20 nations in terms of EV usage or manufacture.

Using Integrated Land use and Transportation Planning as a strategy of urbanisation can result in worldwide sustainability by achieving a few SDGs as mentioned below.

Thus, by using appropriate applications, policies, planning implementations and design of ILUTP, we can achieve sustainable urbanisation and a better future.